Skip to content
Blogs, News, and Events / Blogs / The War for Talent Is Over (If You Want It)

In discussion recently with a client of mine (a pretty hot Silicon Valley high-tech company), we talked about the problems they were having attracting and retaining talent. They mentioned losing talent to FANG (Facebook-Apple-Netflix-Google), and what caught my attention was how often “war for talent” was repeated throughout the conversation—so much that at some point, I felt the meeting was taking place in the White House Situation Room.

And it’s not just this company talking about the war for talent. Everyone is. If you keep your finger on the pulse of talent management, you know which company is attracting more talent and which hot, new startup is losing talent to this other even hotter and newer startup. It’s in every shape and form on the Internet, from blog posts to podcasts to retweets. As if the word war wasn’t said enough in the tragic context of actual war, we take it into our workplaces and make everyone believe that they are soldiers and generals in the trenches of another type of war—a talent war.

Language shapes perception, and in the words themselves, we shape our thoughts. So the words you use consistently have great power and influence in how you feel, day after day. Military institutions use the power of language to create a buffer so soldiers don’t think of the enemy as fellow humans. Now, in talent management, we use similar language that has us thinking about recruiting and talent acquisition as the war, with our competitors as the enemy. And if you don’t think this affects the way you think, you are dead wrong (pun intended).

But do you really want to bring more war into the workplace, and is this an effective strategy? Not for me: I was born and raised—and still live—in Costa Rica, a country that abolished its army in 1948, a conscious decision of our leaders. As a result, I’m happy (and thankful) to have grown up where war is as foreign as snow.

And so I noticed a parallel between Costa Rica and SweetRush. It’s no coincidence that SweetRush leaders chose to start a hub here in 2007, and those same leaders also decided to stay out of the war for talent. Yes, SweetRushians are also pacifists—talent pacifists!

Though anyone can apply for an open position, we don’t actively poach from other companies. We’re growing internally, and we have a vibrant contingent labor practice, but still we do not think of ourselves as fighting our competitors for talent. It’s just “bad karma,” as one of the founders would say. We see our job as growing a remarkable company, and we attract talent as a result.

When it comes to talent, we are not waging a war for talent, but, rather, waging peace. What does this mean? It means we believe in growing people and in helping them achieve their highest potential. We believe that our value-centric, inspiring culture not only attracts talent, but allows talent to flourish. Like everyone else, we need talent. We’re just going about it with a different mindset.

If your search for talent is feeling like a war for talent, maybe it’s time to change the way you think and talk about the subject. Rather than fighting a war, find ways to make your company a place that people want to join and stay. This is the “wage peace” strategy that we believe is best for the long term.

You know that talent today have many choices, and a willingness to move on if things are not just right. So, look internally at how to do a better job of being authentically attractive to candidates and employees. Over time you’ll find yourself on top of everyone’s “Best Places to Work” list.

I talk with talented people every day, people who have choices. And every day I ask myself how I can do a better job aligning their needs with those of our clients. I’m not trying to “capture” them, but to do right by them and our clients. I like to think of this as waging peace, and I’ve found it to be a successful formula.

As the world learned from John Lennon and Yoko Ono back in 1969, “War is over! If you want it.” So it is up to you to wage war or wage peace in your workplace.

Rodrigo Salazar is the Manager of Talent Solutions at SweetRush, and has helped place spectacular temporary learning and development talent with world-class organizations. Give him a shout to see if SweetRush can help with your staffing needs. 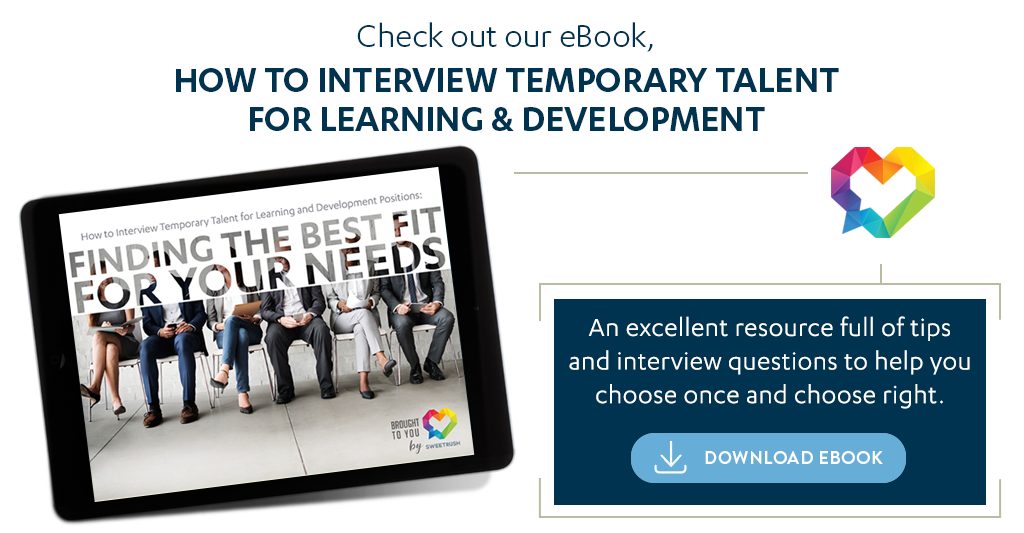 Hire a Temporary Learning Consultant or Outsource to a Team? How to Make the Right Choice

If you want to remodel your home, sometimes hiring an individual, such as an electrician..

Attracting, vetting, selecting, hiring, and on-boarding temporary learning and development talent: should you do it..

The War for Talent Is Over (If You Want It)

In discussion recently with a client of mine (a pretty hot Silicon Valley high-tech company),..

When you’re looking for the perfect learning and development consultant for your team, it makes..